Cities must stay creative for health

Art and cultural activities can be thought of as multimodal health interventions, which combine lots of different components that are positive for people’s health. So said Dr Daisy Fancourt, Associate Professor of Psychobiology and Epidemiology at University College London, during a keynote talk at Healthy City Design that drilled deep into the detail about the influence of the arts on health.

The health benefits of the arts, said Dr Fancourt, are myriad. They involve things that are cognitively stimulating, they help people evoke emotions and regulate emotional responses. They involve social interaction and get people out of the house, involving certain amounts of physical activity and reducing sedentary behaviours.

“All of these components together can lead to lots of different psychological, physiological, social and behavioural mechanisms,” she explained. “These can all help in prevention, management or treatment of illness.”

Illustrating some of the vast evidence base that exists in this field, Dr Fancourt stressed the robustness of the research, and how the relationship between health and the arts cannot be explained by outside factors such as socio-economic status, or other social behaviours.

The arts as a tool for recovery

She first posed the question of whether evidence exists that arts participation can help people with depression recover from mental illness. One small-scale study, a community drumming programme for people with moderate mental health depression involved two groups – one group undertaking 10 weeks of drumming sessions for an hour a week, while the second group did nothing over the same period. The drumming group enjoyed significant improvement in factors such as anxiety and social resilience over the period, with an improvement in anxiety of 23 per cent and depression of 38 per cent. In a follow-up three months later, researchers found the results had maintained statistically, suggesting that relatively short-term interventions for health can have long-lasting benefits.

She then turned attention to much larger cohort studies, comprising often hundreds of thousands of people, and tracking their lives over several decades.

Dr Fancourt said: “We’ve found that people with creative hobbies, if they have depression but can be persuaded to take up a hobby, are more than three times as likely to recover from their depression than if they don’t take up a hobby. This mirrors a lot of the things going on at the moment with social prescribing in communities.”

The arts as a preventive health resource

Another key question concerns protection against the development of health conditions – is it possible that people who engage in the arts actually have a lower risk of developing these problems? 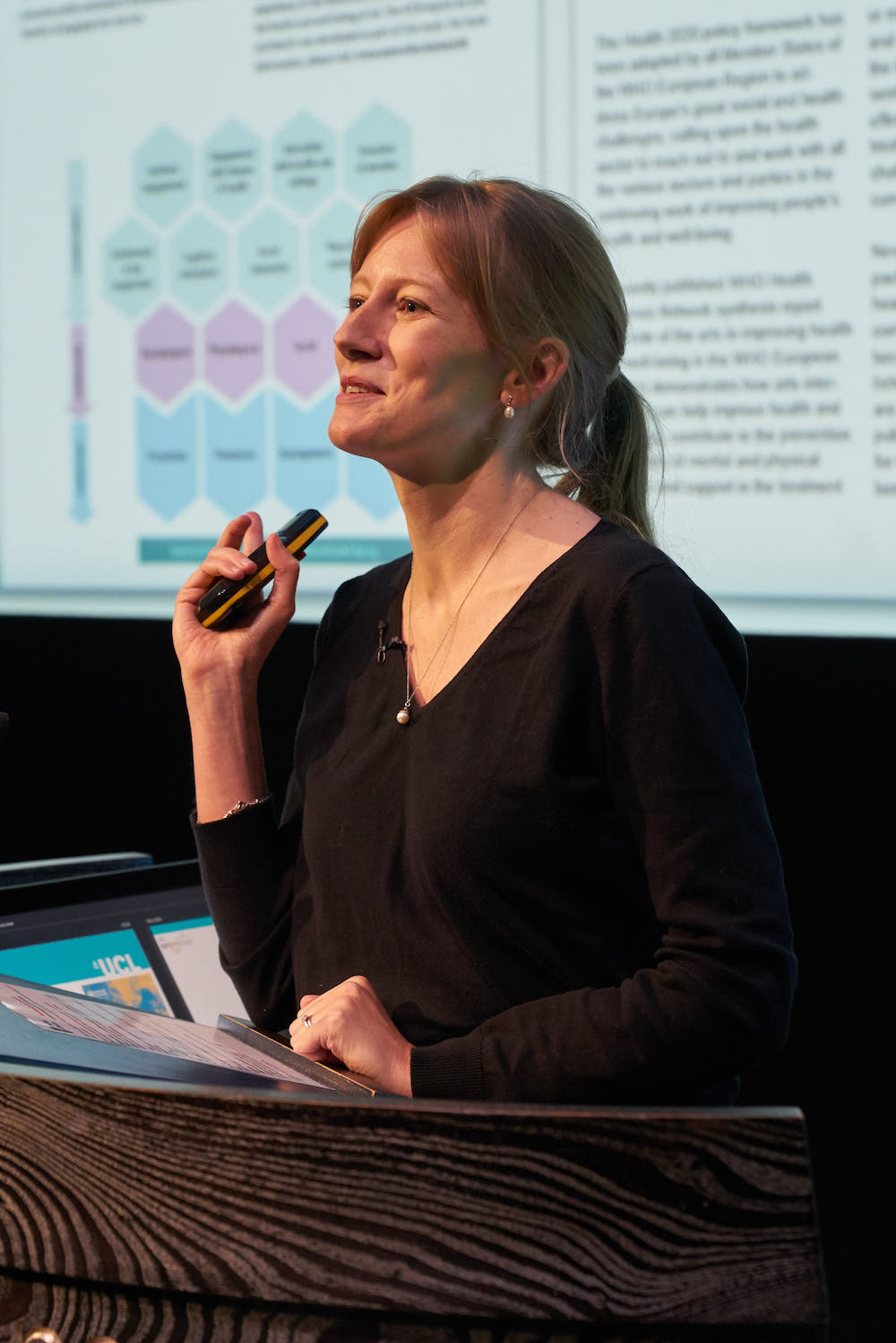 “This equates to about 48 per cent lower odds of developing depression if people are engaging in cultural activities once a month,” explained Dr Fancourt.

“Essentially, we find all the people who do regular engagement and try to find them a matched twin who is identical in every aspect – demographic, socio-economic, behavioural – and see if the ones who are doing the cultural activities have got better mental health.

“We found across 10 years that those people who were engaging in the arts every few months or more have 18 per cent lower odds of developing depression compared to those who didn’t.”

Dr Fancourt went on to highlight how the arts are linked to emotion regulation; for example, people who attend concerts have lower levels of stress markers, such as cortisol and cortisone, while people with lower levels of loneliness were found to have better regulation of their inflammation as well.

The arts can also enhance wellbeing. Participation in arts activities and going to cultural venues and sites are associated with lower levels of mental distress, higher levels of mental functioning, and higher levels of life satisfaction, she explained. Child development is another area that can benefit from creative participation. Research has found that young children who read fiction every day have higher pro-social behaviours, lower social problems, lower conduct problems, and lower levels of hyperactivity. Another found that children at age 11 who were reading fiction every day had about 3 per cent lower odds of trying alcohol by the age of 14, and 15 per cent higher odds of following their daily recommended fruit consumption.

The arts and its links to healthy ageing

A further question to consider focuses on healthy ageing: ie, if you engage with the arts across your lifespan, can you accumulate some benefits that enable you to have better resilience against cognitive decline?

She touched on studies that highlighted how people who engage in cultural activities enjoy better memory and semantic fluidity – how well they can remember words and conversations.

Analyses on dementia incidence have been conducted showing how two or three people who engage in cultural activities out of every 1000 will develop dementia in a year, compared to those who never engage, for whom it’s about nine or ten. And it’s not simply enough just to socialise, added Dr Fancourt, pointing out that enjoying cultural activities delivered added benefits.

The idea that we can build our brains to be resilient against cognitive decline as we age is called cognitive reserve, and it’s impacted by many things, including diet, exercise and education. But four other factors that influence cognitive reserve can also be supported by engagement with the arts: social support; positive affect; stimulating activities and novel experiences; and cognitive training.

“What we also find is that purpose is linked with all manner of aspects of health: mental health, physical decline, our physical capability, our levels of inflammatory and immune markers in our body, health behaviours, how sedentary we are, and how we use our time. Purpose is a critical aspect of our health overall, particularly as we age, so I propose that cultural activities are a very simple and efficient way of encouraging and developing people’s sense of purpose.”

Once again, the results are positive for there being a strong connection. One study showed how people who were engaged in vigorous activity once a week have 26 per cent lower odds of developing chronic pain.

“We also found that people who were doing cultural activities had 25 per cent reduced odds of developing chronic pain, suggesting the importance of combining these psychosocial activities, as well as the traditionally considered physical activities.”

Disability and frailty were also explored, with research showing that people who engage in cultural activities have a lower risk of developing disability and becoming frail in older age.

Drawing all this research together, Dr Fancourt explained: “What’s really critical here is the fact that the arts are bringing together so many of these different components, but they’re doing so in such an enjoyable way that people often don’t think they’re doing a health-promoting activity, which is normally the biggest turn-off ever for actually doing anything. But they think that they’re doing something that they want to do, that they’ve got a passion for and enjoy doing. I like to think of the arts as a vehicle for latching other health-promoting activities on to, so it’s a very efficient way of encouraging people to do all the things that they already know they should be doing in their life.”

But while a lot of arts activities exist, levels of access to and engagement with them is far from equal. Factors such as socio-economic status, education, ethnicity, mental health and disability can be barriers to individuals, while deprived communities, rural parts of the country and industrial areas may be less likely to provide an abundance of opportunities to enjoy the arts.

With this in mind, Dr Fancourt concluded: “We need healthy city development to stay creative, to make sure that people have the opportunity to experience the health benefits that we’re seeing so clearly coming through from research studies.”

Organised by SALUS Global Knowledge Exchange in collaboration with The Helen Hamlyn Centre for Design, Royal College of Art, the Healthy Cities Design 2019 International Congress & Exhibition will be held at the Royal College of Physicians, London, on 14–15 October, 2019.