The revenge of the suburbs, solving the urban paradox, and taking control by getting up and doing things. These were just a handful of the many insights and paradigms on ‘designing a new world’ that the three eminent keynote speakers shared with delegates during the opening session of the second day of the 4th Healthy City Design Congress.

Starting proceedings was Ben Page, chief executive of Ipsos MORI, who, unsurprisingly, said 2020 would not be going down as a great year for the city in established economies.

Yet, it turns out that many Europeans and North Americans weren’t all that keen on living in cities even before the pandemic – data highlighted by Page showed that popularity for city living stood at 32 per cent in the US;  29 per cent in Germany; 27 per cent in Britain; and 25 per cent in France. Conversely, and perhaps owing to the huge growth in urbanisation and economic growth in Asian countries, China and India scored the highest at 72 per cent. 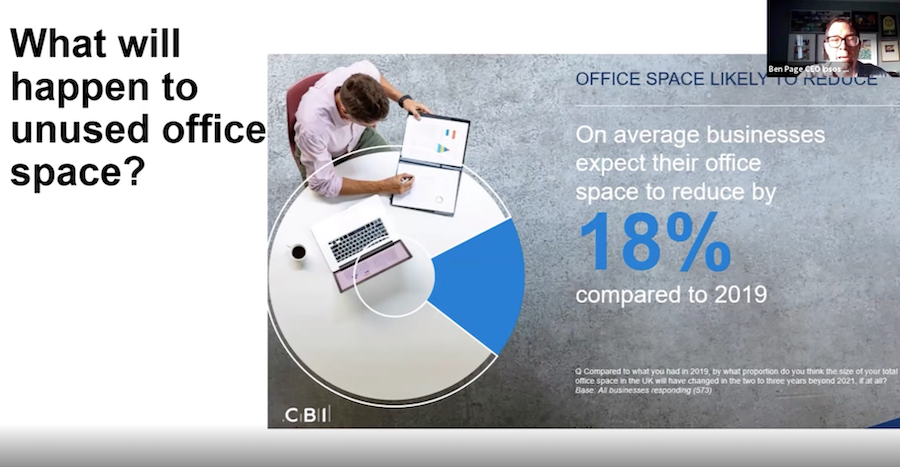 Interviews carried out with Londoners at the end of last year reflected stark inequalities about living in the city. Asked, for example, if housing in London was affordable for them, only 14 per cent of people surveyed said it was, while 69 per cent agreed that is a good place to start a career. Rich people were overwhelmingly positive (90 per cent) about whether the city is a good place for them to live, compared with just 10 per cent of poor people. Families (32 per cent) and older people (26 per cent) were also less than enthusiastic about city living.

“So it’s great if you’re rich but rather less enjoyable if you’re not,” explained Page, who added: “Some of the existing trends before the pandemic of shuffling poorer people to the peripheries of our big cities are actually accelerating, and this is one of the great unknowns.”

But Page warned that we need to be a bit careful about the many headlines today claiming that the pandemic has changed everything forever and the “old normal” will never return.

While the acceleration of use of digital technologies is likely to continue after the pandemic, it’s interesting to note that even in 1999, when internet access was far lower than today, a similar proportion of people in Britain felt that technical progress was destroying their lives, and wished that they could slow down the pace of their life. They were also just as likely to say that their privacy was under attack as they are today.

“The world is likely to continue to become more urban but what sort of urban will it be?” questioned Page.

One issue and value that certainly hasn’t been dented by the pandemic is the climate crisis. According to Page, “it’s the thing that everyone agrees on, it’s a clear and present danger”.

In regard to working from home, evidence from the CBI suggests that on average, businesses expect their office space to reduce by 18 per cent compared to 2019.

“Half of British business say they’re going to move to blended home and office working,” said Page. “This will ultimately have profound consequences for transport networks, for the economy of our inner cities. And what happens to unused retail space? Do our high streets become more residential, with people moving back into city centres in the way they haven’t done since the second world war?”

With many people wanting to move away from the city or town centre, Page suggested this could herald “the final revenge of the suburbs”, which, until relatively recently, have received a bad press. Whether this plays out is uncertain but he believes that cities are going to have to reinvent themselves and address inequality following the pandemic, focusing on the benefits of agglomeration and bringing people together.

“Great cities like London, Paris, Tokyo, have survived wars, famines, pestilence, etc before,” he concluded. “They’re not going to go away but they may be a little bit different.”

Sitopia: how food can save the world

The relationship between the city and the rural countryside in respect of food and how we eat was the topic of the next keynote speaker, Carolyn Steel’s talk. An architect and author, Steel published a new book, Sitopia: How food can save the world, as the UK entered its first lockdown in March.

She explained how today, landscapes don’t feed us anymore, they’re often thousands of miles away, and they’re often radically de-natured. This loss of contact she described as “the urban paradox”. As a counter, she derived the word “Sitopia” from Greek and conjured it up as an alternative to “utopia” to mean “food place”. 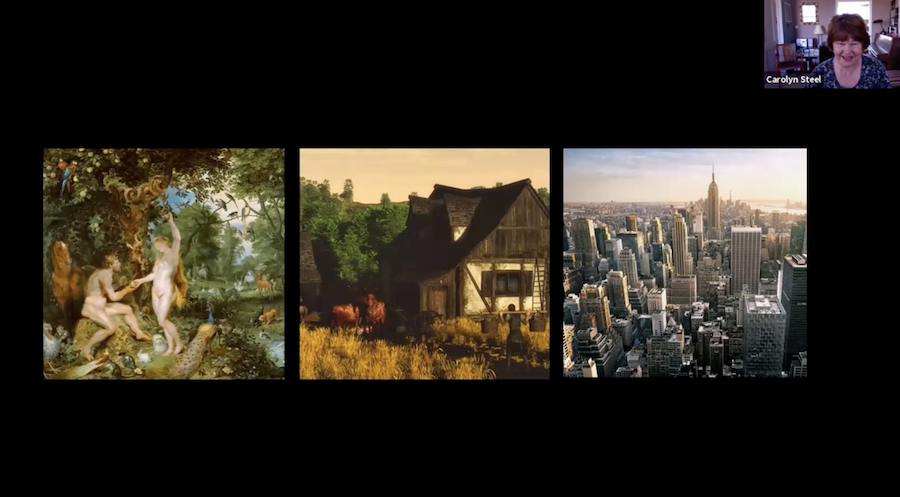 She explained: “We’ve gone from living in the larder, ie, living in a landscape that feeds you directly, to living on modified landscapes, the farm, where we’ve invested a lot of work and effort into the land so it can feed us more effectively, and now most of us globally live in cities.”

And while this shift, and accompanying trends, such as convenience and increased standards of living and wealth for many, may be seen as a sign of progress, she warned that a lot of computerisation and automation are now taking over many of our jobs, and humans are getting very sick as a result of some of these changes relating to urban growth and living.

It’s led as well to the creation of something that doesn’t actually exist called cheap food, argued Steel. Yet, in reality, we’ve simply externalised the true cost of feeding ourselves, and we’re seeing the impact in things like higher global greenhouse emissions, obesity and undernutrition, huge food waste, degraded marine ecosystems, and a massive decline globally in insect and bird life.

Unfortunately, this mechanised way of eating is going global,” lamented Steel, who pointed out that there is a vast amount of money and commercial interest pushing the cheap food agenda. While Covid-19 has exposed many signs of fragility in the way we live now, it is also, she believes, the best opportunity for a major reset.

“The fundamental questions haven’t changed: how are we going to eat? How are we going to make our home in a landscape? And how are we going to maintain a balance between society and nature?” said Steel. “And that’s at the heart of all utopian thinking – from the Ancient Greeks and Plato, to Sir Thomas More, to Ebenezer Howard’s Garden City movement. It’s about solving the urban paradox.

“Sitopia is a food-based alternative to utopia to think in a multidisciplinary way about the profound questions of what is a good life and what is a good society? And how are we going to live on the planet?”

And history shows us that it’s usually in times of crisis that people remember the true value of food, and there are signs of this during the pandemic. “We’ve seen an increase in neighbourliness, people baking for each other, people rediscovering the joy of cooking with their kids, new food networks have grown up, and an increased interest in growing your own,” she said. “These are all signs of resilience to counteract the fragility that Covid-19 has displayed.”

Concluding, she said: “We can incorporate food in our urban planning again. And we have to bring the city and the countryside together again. A good society is a society in which everyone eats well. Food is an amazing connective tool through which we can see the world and build a better world.”

Health is made at home

Growing your own, sharing cooking tips and providing healthy food locally were examples of health creation that Lord Nigel Crisp shared with delegates in the final keynote talk. His latest book, Health is made at home, hospitals are for repairs, came out as the UK emerged from the first lockdown, and it can be described as a celebration of the many people in communities up and down the country who are creating the conditions for people to be healthy and helping them to be healthy – the so-called health creators.

As a former NHS chief executive, Lord Crisp acknowledged the fantastic work of healthcare workers in fighting the pandemic but he recognised, too, that the general public have been keeping communities going during this time. And this won’t change, he stressed, after the pandemic, as the NHS can only deal with the symptoms of many of today’s health problems, such as mental health, addictions and loneliness, by doing the repairs; it can’t deal with the causes.

He believes that future health policy should focus on three key areas: health services and care – which Lord Crisp describes as the really important repairs and more that are done in our hospitals; prevention, which is all about the causes of ill health, such as preventing obesity and stopping disease; and health creation – providing the conditions for people to be healthy and helping them to be so. 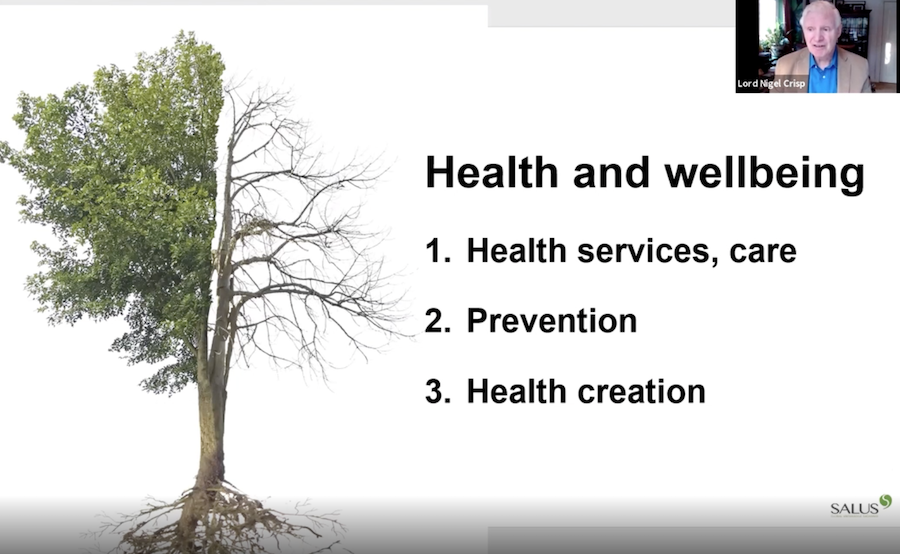 His book is packed with stories and examples of health creators all over the country, including Incredible Edible, a group of women in the north of England who decided to start growing vegetables in public spaces. It has led to connections being forged in the community, cooking ideas being shared with residents and with Syrian refugees in the area, and supporting local businesses. A more technological example is that of Vertical Future, a vertical farming business set up in Deptford, London, providing local employment, delivering local food, promoting health and managing quality. And it is evident in big business, too, where the City Mental Health Alliance has set about improving mental health for those in London’s banking and financial services, recognising that they and their businesses create huge levels of stress.

A second is learning by doing. “There aren’t blueprints for this,” said Lord Crisp. “Working together, praxis not poesis if we go back to Aristotle, doing rather than making, that activity.

This session was kindly chaired by Chris Liddle, from Covalent Group and HLM Architects, which, along with Llewelyn Davies, kindly sponsored the congress stream on Planetary Health.

Organised by SALUS Global Knowledge Exchange in collaboration with The Helen Hamlyn Centre for Design, Royal College of Art, the Healthy City Design 2020 International Congress & Exhibition will be held virtually from 30 November - 3 December, 2020.